Over the past few months, I have been collecting hops by the ounce. I’ll go into the local home brew shop with the intent to buy something else, but a quick look through the fridge will always reveal a new variety that will somehow be added to my purchase.

One of the varieties in my collection is Australian or AU Topaz hops. It’ll be a part of a great hoppy beer that I am dreaming up which will also feature Pacific Jade hops and a few ounces of our tested and approved Sorachi Ace hops. 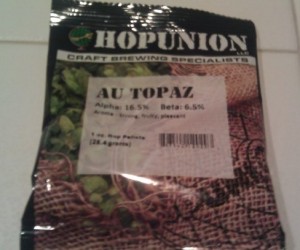 A little history: In 1985, Topaz was bred at the Rostrevor Breeding Garden in the town of Myrtleford in Victoria, AU by Hop Products Australia. It was supposed to be a variety that would be  exclusively grown and processed to make hop extract, but in 2007/2008, it made its way into a brew kettle or two.   From there, its unique characteristics were given the proper showcase so much that they are now available to homebrewers like you and me.

I am excited to see how Topaz melds with the other hops. Let’s now read the particulars of this variety from the Southern Hemisphere:

Aroma/Flavor:  There are many different descriptors out there.  When used during the boil, it imparts a light tropical fruit taste, similar to the lychee fruit.  Other labels include berry, passion fruit, citrus (tangerine), spice, and apricot.  When used in dry hopping, dank, resinous, grassy tones shine through to the finished beer.

Typical Usage: Because of the high alpha, bittering is a good choice for usage but the flavors and aromas that this hop brings to the party when used later in the boil makes it a good dual purpose variety.

Beer Styles: Fruity IPAs and APAs.  Some sources said that it had earthy tones like English hops do so maybe an Extra Special Bitter that really has something extra special to it.

I read that these hops are similar to Galaxy hops, which I profiled a while ago.   It’s about time I put these fruity hops to the test and made a true nouveau hoppy beer.   When I post the recipe, I will link to it from here.  Cheers and brew on.