This variety got a lot of attention during the hops “crisis” of 2007-2008. Homebrewers were looking for high alpha hops and this variety was available.

I started thinking about Sorachi Ace recently – wondering if its flavoring would have worked well in my Saison.

Some bits of information:

The variety was named after the Sorachi Subprefecture in Hokkaidō, Japan. It was developed for Sapporo Breweries and used in their beers. The pedigree includes Brewer’s Gold and Saaz and has high yield potential. It was originally released in 1984 and was grown for a while in Japan and China.

It was not available in the US until Darren Gamache of Virgil Gamache Farms picked it out of the USDA Hop Cultivar Collection in Corvallis, OR and started to grow it. Sorachi Ace became commercially available in 2006 and since then, has become a variety that has garnered a large amount of interest for use in intense American beer styles.

Typical Usage: Bittering, but with that focused lemon note – it would probably do well when used later or after the boil.

Beer Styles: Probably any beer that would work with a lemon taste. Saison is one that comes to mind. Maybe an IPA with other hops that have citrusy tastes like grapefruit and orange. 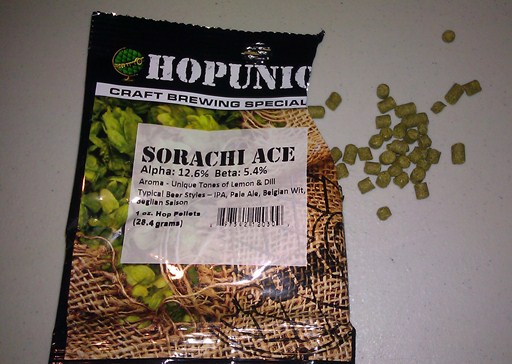