The season is over yet again and all the cones have been picked. We had a successful hops harvest 2012.

But not as successful as I thought it would be. Here’s why I think so.

It was a weird year – we really didn’t much of a winter so the shoots came up pretty early. Noting that it was the plant’s third year, I let it grow as much as possible. I didn’t cut back the shoots at all. Maybe I should have, since not all of the bines were winners. I would say a good number didn’t produce any cones at all.

I did trim back the leaves once we got into late June to try to get more energy into producing hops rather than big green leaves. That sorta worked.

I didn’t water the plant as much as I did last year. I was giving it a good drink 5 times a week at least during the dry spells in 2011. This year, I was more lax.

My goal was to get a pound of dry hop cones out of it this season, and I got less than last year. I haven’t weighed them yet, but I am pretty sure I got more than ounce and that is my minimum goal. 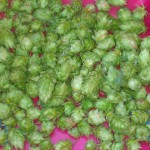 I guess the true end goal is to make one harvest ale every year. Besides that, I am not going to brew a classic style using my home grown hops.

On the other side of the fence, my brother had his best harvest ever. Now I will be able to bitter with the home grown Magnum and use Mt. Hood for the late editions.

Prune back the weaker shoots
Water more often
Cut back the oak tree limbs above the shed to get more sunshine to the hop bines
Pray for a colder winter – nope, can’t type that sincerely