For The Love Of Hops

I just bought Stan Hieronymus’ book For the Love of Hops and I haven’t wanted to put it down since.

The book is dedicated “to all of those who have been scratched by the hops” and I think that is a good number of us.

If you have ever dealt with hop bines, you know they can tear up your hands and arms pretty well. You don’t expect it when look at the plant. They don’t have visible thorns. No, hop bines and leaves don’t reveal their damage until after you handle them. A few minutes later, you’ll look at your forearms and hands and you see multiple inflamed red scratches.

Beyond being physically scratched, I think we are also… uh… what’s the word…? emotionally scratched by them too.

A great many of us crave hoppy beers from the aroma to the biting bitterness in the aftertaste.

This book has a great overview of the lifecycle of hops from growing them to the harvest and how they are used in the brewing of beer.

There is some science behind how aroma is produced in beer and how our noses and brains perceive it.

Some techniques are explained about how they are used in the kettle and dry hopping tactics that I want to try on my own beers.

There’s even some recipes included in one of the later chapters that I would like to try out. If there is another thing I would like to add to my 2013 Brew Year’s resolutions, it would be a point to make a beer where I was 100% happy with the hop aroma and flavor. Maybe some of the techniques in this book can help me to do that.

Lastly, there is information about the business of hops and how much the market has changed over the years. As a consumer and a homebrewer, it was interesting to learn more about hop extracting process.

If you are reading this post, this book will be a good read for you. Chances are you have been scratched by the hops too. Maybe you can soothe that itch with a pint and this read. 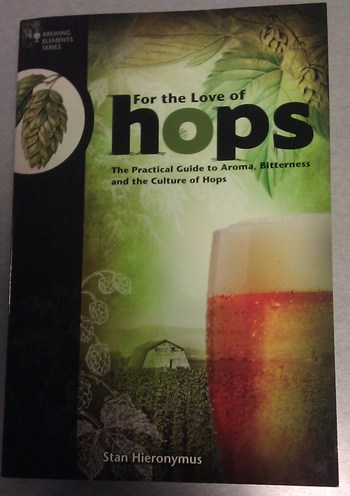