This exchange is a long distance one.  It spanned a whole ocean to make here to our studios in Mike’s basement (Studio C).  Here’s our homebrew swap #18 – the continental European addition.

This beer swap was the first 1 to 1 swap we have ever done.  Alex from Göttingen, Germany sent me a recipe that he was going to follow and I told him I would brew the beer too as part of the swap. I was interested in seeing if we brewed the same beer how much different they would be.

He wanted to brew this beer primarily to try out German grown Sorachi Ace hops. Knowing where they originated from, it was going to be fascinating to see how much the terrior affected the flavor.

I will tell you truthfully – there wasn’t much difference in the aroma and flavor of the hop. Now that I know Sorachi Ace well, the same furniture polish lemony aroma was in both beers and the creamy lemon flavor with a touch of dill was present with each taste.

If there was any difference, Alex’s beer had a little more body than mine. My beer seemed a little thinner than his and the hop aftertaste lasted a bit longer. These slight differences could be due to mash temps and duration of dry hopping but we can’t sure. I am very surprised how similar they are.

The big learning moment could be that the Sorachi Ace could be German grown at a large scale sometime in the near future. Even with the different environment in which it was grown, the hop kept many of its distinct characteristics. Here’s to more German grown hops.

Here’s Alex’s letter to us: 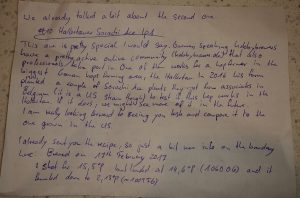 Thank you, Alex, for the beer and making the world seem ever smaller.

He sent me another beer that he brewed with his own home grown hops. I thought I would type out this part of his letter describing it.

This beer is dedicated to a political event that took place in the town I live in 2005.  There are still fascist groups that relate to the Nazis politically active in Germany and a bigger one wanted to march through the city and some historical places such as the local synagogue memorial, where the Nazis burned on down in the 30s. Luckily, the protest was so big that the police decided it was disproportionate to clear the streets of thousands of protesters and the Nazis had to end their march before they could reach the historical places. In fall 2016, they retried and to keep the memories alive, I worked through the archive and created this beer.

Thanks for sharing, Alex. Brew on!