I think the heading of this post should have a question mark at the end of it, or maybe have the word results in quotation marks.

What would you think if you had experimented with a certain clarifying agent and had had dramatic results as a conclusion of that experiment but when you followed the same procedure again, you were underwhelmed with the outcome?

If you’re like me, you keep on trucking.  That’s all you can do.  The other thing about being me is that you have to blog about it.

So I had scheduled a week for the clarification process.  I added the bentonite to the secondary vessels and waited 7 days for the clay to do its thing.

After a week, I didn’t see much difference.  Take a look at this photo album of the mead depicting different periods of time during the bentonite process. 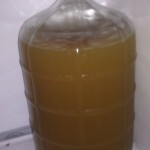 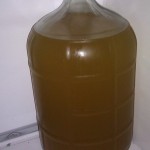 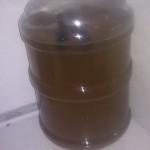 At the far left, the mead was put in the fridge to chill down before the bentonite was added.  The middle picture shows you what it looked like a week later.  If you look really closely, maybe it looks clearer?  The color is a little different but it still has a haze to it.  The photo to the far right is the mead after a racking and the oak spirals floating at the top.  You can see that the third vessel is a better bottle.  The volume of mead has been reduced a bit.  I probably left around a half gallon in the second vessel along with the yeast and the clay.

The mead now gets to sit and condition with oak for six weeks.  I am confident that during that time, the mead will clear up even more and will be looking beautiful by the bottling day.  We’re planning to bottle it on Saturday, August 30th and that is plenty of time for the rest of the haze causing particles to settle out.

I guess my biggest disappointment was the lack of a tremendous, overwhelming reveal after the bentonite phase.  Boo Hoo.

It’s clearer – you just aren’t blown away by it.  At least I am not.