Back in the summer of 2017, a Kickstarter campaign caught my eye. It was for this interesting piece of homebrew tech called Plaato digital airlock. After pledging my money, the project was fully funded but it took a while for the product to get manufactured and sent out. My device arrived in October of 2018, just in time to monitor my Community Beer. Learn more about this digital airlock and what we think about it so far.

So the Plaato device was started by a couple of dudes in Norway that wanted to create a device that would be helpful in their hobby of homebrewing.

This digital airlock allows for you to track a few different things during fermentation.

The device is WiFi enabled so it sends information to the cloud that you can access from an app on your phone. So when I am at work, I can see what’s happening to my beer at that moment.

At the start of fermentation, you enter the volume and the specific gravity of the wort and from there the device collects data based on “bubbles per minute” which then gets calculated to reductions in your gravity and increases to your alcohol content. 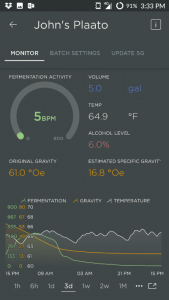 After the device was delivered to my house, I opened up the stylish, well constructed box to find an airlock and a USB cord. There were no instructions – just some information on the back of the box on where you could download the app.

Once I had the app, I was able to configure the device to connect to my WiFi and then put it aside.

After the community brew, I sanitized the bottom tube, plugged the airlock in (you have to get a USB –> Electric plug adapter), filled it with water, and let it go.

After a day, data started really coming in. It was pretty cool to track the changes.

I didn’t have an issues with the temperature readings. They were in line with my room thermometer.

After a week, the Plaato stated my beer’s gravity was 1.016. I checked it with my hydrometer and it was 1.012. The app allows you to update the gravity so I did and it recalculated my alcohol.

Pretty cool tech. Check it out.

What Is A Homebrew Beer Batch Size?