Home brewing plans take time to come to be. Maybe in 2015 I will learn to execute quicker. The thoughts for the SMaSH beers as a part of the BIAB Series were put forth in July!

Better late than never – some plans never see the light of day.

Saturday night I had the time to brew in a bag (BIAB) and use one variety of hops throughout the boil. I have two more to do which I should get done between now and Thanksgiving.

Brewing one gallon batches using the BIAB method brought my brew session time down considerably. From heating up my mash water to cleaning up afterward, I was done in 3 hours.

I brewed right on my stove top for the first time in years. It was nice to not have to deal with the elements outside and the extra equipment. Everything was right there in my kitchen – what a concept!

With nearly 2 gallons in my pot, it took no time at all to get up to my mash temperature and hold it there for an hour with the grain in the bag.

The recipe was a modification of the Mosaic SMaSH one I wrote up earlier in the year but what we’re trying to learn has stayed the same. We want to learn more about this variety’s flavor and aroma.

I am using just one ounce of hops – I put in a quarter of an ounce at the start of the boil, another quarter with 15 minutes to go, and another at flame out. The last quarter will be added with a few days left to go in the fermentation.

I did this schedule with for an experimental Sorachi Ace hops wheat beer last year and it worked well to get a full profile of the hops.

Here’s some photos of the session: 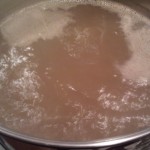 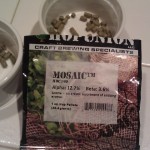 So Mosaic is done – El Dorado is next – and then Equinox will be last. Tasting videos will follow once the beers are ready.