Honey is a delicious, sweet food that many homebrewers come around to dream about using in their beer recipes. Brewing a honey beer at home is tasty and fun.  This post has information about brewing beer with honey and how to best incorporate it into your homebrew recipe.

Since honey is almost totally fermentable, all the sweetness that you perceive in honey in its natural form will be converted by the yeast after fermentation.

Adding honey later in the brewing process will help you to retain more flavor in the finished beer.

Another good reason to add honey or any large amount of simple sugars later in the brewing process is to drive your beer’s final gravity closer to where you want it.  A large amount (defined as 2 pounds or higher) of honey added during the boil may cause your beer’s final gravity to be higher than expected.  Your yeast will feed on the simple sugars of the honey first, then turn to the maltose provided by the grains.  If there are too many simple sugars, the yeast may get tired out and may not be able to ferment as much of the complex sugars as expected.

A successful way to add a large amount of honey to your beer large is to add them after about 4 days of fermentation.

Let the yeast work away at the maltose first, and then give them simple sugars for dessert.  This way you’ll still make your target final gravity.

Honey is fairly voluminous so it may be difficult to transfer into your primary fermentation vessel.  Try warming it while it is still in its container in a water bath with a temperature of 100° F or 38° C for around 30 to 45 minutes.  It should get into a less viscous state and should pour easily into your fermentor.

Beers brewed with honey can have a thin body if the yeast is successful in fermenting it completely.  You can combat this issue. If you are an all grain brewer, mash your grains at a higher temperature around 155° F or 68° C.  Extract brewers can use some maltodextrin (half pound) to increase the body of their beer.

Learn about my plans to add honey to the secondary. 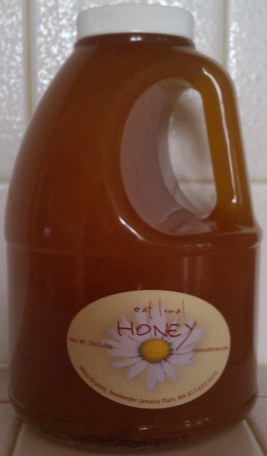