In an earlier post, I alluded to that a great cleansing would come. There has been a large build up of mediocrity occurring in my basement and it was crying for a purge.

Tonight, I pressed the figurative reset button on a large amount of the beer I had in storage. The caps were popped on an assorted case of 22 ounce bottle and the contents were poured down the drain.

Here a photo of the carnage: 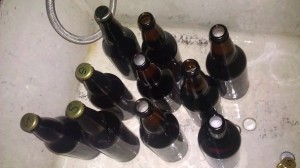 Most of me is against getting rid of any beer but I knew these were bad examples of beers and they were not going to be enjoyed by anyone any time soon.

I could not help but feel like Eliot Ness, watching the beer foam up in the bottom of the sink and slowly tumbling down the drain.

The Saison hadn’t come out the way I planned. The Doppelbock was more like a bock and I learned what I need to learn to brew that better next time. The Pilsners weren’t getting any better in their advanced age.

Did I get rid of everything? No – I still have a few bottles left of each style that are mentioned above to study academically at some later date. I can say that enough bottles were freed up to make way with the new stuff that will be ready in the near future.

In February, there will be a cider to bottle. I will need to add a little bit of yeast along with some simple sugars at bottling so that it will carbonate. The English ale yeast that I used for fermentation is spent so some reinforcements will be called in to help out.

In March, there will be the Vienna Lager to bottle. It’s lagering now and will be more than ready around St. Patrick’s day (not traditional).

And sometime in between the cider and the lager, there will be a dunkelweizen.

Stay tuned. From our losses, there will be gains. Brew on.

Best Yeast Strain For A Dunkelweizen?

Building A Brew Stand – An Introduction