When I was younger, a friend of mine told me how his uncle would buy freshly pressed apple juice from an orchard and turn it into cider by adding raisins and letting it sit on the back porch for a couple of weeks. After that time, his uncle would have a nice bubbly beverage for Thanksgiving.

Flash forward 14 years and here I am adding raisins to my cider. 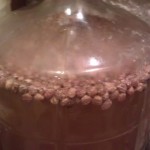 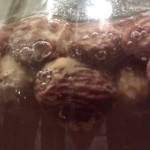 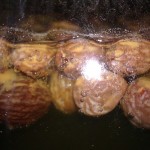 Now, from my friend’s story of his family cider making, the raisins appear to have been the delivery system of yeast to ferment the juice into cider.

My use of them? I guess it’s the same reason, but I already had a primary fermentation using English ale yeast.

These raisins were added after I racked the cider into a new, secondary container after things started to settle down after 3 weeks in the carboy.

Last year, I used raisins in my New England hard cider but I don’t think I did it right. I chopped them up and I steamed them for 15 minutes before I added them to the cider.

Chopping them up was a big mistake. It was difficult to rack the cider away from the floating bits of the dried fruit. The bits were in the bottles I entered into competition and I was dinged for it.

This year, they were added whole and as they were. No steaming – I was hoping the yeasts that were on the raisins made it into the cider.

I am not sure what flavors the raisin’s yeasts will bring nor do I know if the cider will pick up any dried fruit flavor from the extended contact in the secondary vessel.

We’ll know more after this batch is done. I will not be adding any other flavor agents to this cider. No oak chips or any spice. This cider will only have the addition of raisins.

I bottled this cider and had some initial thoughts on the taste of it.

See how the finished cider turned out in our tasting video!