The path to making great cider has not been one I have travelled long. It’s been just over four years since I started but I won’t feel like I have really ascertained true cider zen until I can convince a few judges to give me a medal in competition.

There, I wrote it.

The achievement of placing in competition has only been a goal of mine for a couple of years. The first few batches of cider I made weren’t good for anyone anywhere.

Now I feel like I have the cider making process down and the ones I make are pretty good. Well, I think they’re good.

But until I get a place to stand on the podium, I won’t know for sure. So I entered the last few bottles of a cider I made last year into the Boston Homebrew Competition. A few days ago I got my score sheets back and I found the ones for the cider out of the ordinary. 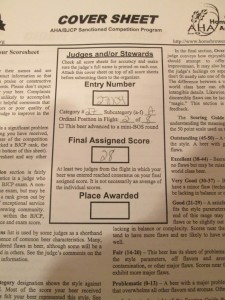 The final score was fine enough. I was pushing to get into the 30s but I’ll take what I can get. As I looked through the sheets, I discovered a wide difference in the scores I received. 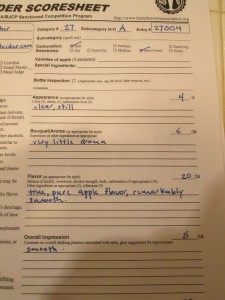 One judge gave me a fairly high score and had some comments to go along with why he scored it that way. 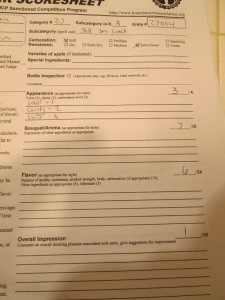 Another judge gave me a very low score with very little commentary. The 1 out 10 for Overall Impression was the real kicker. I would have liked to know why the summary score was so poor.

Last night, I wrote an email to both of these judges to get some follow up thoughts on their sheets, along with a message to the president of the club that put on the competition to understand the process of how they scored entries.

Both the judges wrote back to me this morning. You can probably guess which one had more to say that the other one. Since they are both owners of a craft cidery in my neck of the woods, I am glad they are taking part in homebrew competitions and replying to emails from idiot bloggers like me who are intent to figure out how to make great cider at home.

Dear readers, I write this post questioning every keystroke. Am I being petty and making excuses for the behavior of a sore loser by presenting this post to you? I ran the idea by Mike and he greenlighted it so he’s partially to blame for this tangent into self-interest.

The overarching thought that I have to this whole situation is the collective palate of cider drinkers in this country. Do we really know what an excellent cider tastes like?

I have had wine like ciders, English ciders out of a tap at a London pub, soda-like ciders made by huge brewing conglomerates, and craft ciders made at small cideries near my home.

One thing is true about all of them, they all taste different. Does more definition need to come to the category?

Maybe I need to enter into cider specific competitions.

It doesn’t matter what the answers to these questions are. I know I am going to keep trying.