I also told him we are now friends with Charlie P. on Facebook. He didn’t know that either. Dude, the world is shrinking….and these were the subjects we discussed during the first beer.

The second beer we had was a Cantillon Kriek Lambic and it was tremendous. I have had some Lambics before, but this Kriek was great. Not sure if a master of pairing beer with food would have approved of my Kriek/BBQ Cheeseburger combo…but oh well. It worked for me! 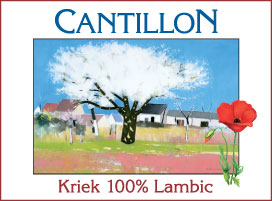 Lambics are traditionally fermented with wild yeast, including our friend Brett (Brettanomyces). Not sure if this Kriek was fermented with Brettanomyces but it had a light body.  It also had a sourness that may have come from cherries or bacteria or both, but it definitely did not taste like “beer”. The range of flavors you can get from different kinds of beers is amazing…and I am glad I am still amazed to this day.

The wild yeast that live in Senne valley of Belgium give lambics have their signature taste. This concept gives me a few thoughts.

1. What would wild yeast that live in my neighborhood make my beer taste like? They would probably bring in da noise and bring in da funk…and not in a good way…but it might be a good experiment. Put that one on the ever-growing list of experiments that the Brew Dudes need to conduct.

2. Would I ever attempt to brew a lambic? You can get strains of Brettanomyces from White Labs. It might be interesting to give it a go. My hesitation comes from the fact that Brett is usually seen as an off-flavor in other beers…which brings me to thought number 3.

3. When is someone’s off-flavor someone else’s on-flavor?

I would like to get input from readers who have brewed with Brett. What has your experience been?