Here’s a recap post from the Big Brew day last Saturday. Mike didn’t brew any of the suggested recipes but he did take the occasion to brew a saison for summer with an experimental twist. For this saison, he split the final post-boil volume into two separate vessels. One vessel will be fermented with the Belle Saison dry yeast. The other vessel will be fermented with Belle Saison and some Brettanomyces.

I took some photos during the brew. Mike’s set up consists of some large vessels so he can get a full volume boil for these greater than 10 gallon boils. 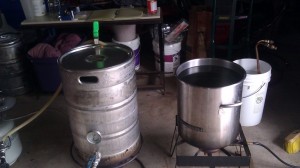 The grain specifics and volumes I did not record for this post but I do know that he is using a little bit of acidulated malt in the mash since he had success using it in the last saison he brewed. Some of the new homebrew club guys hadn’t used the acid malt before so it was a treat for them to see it and chew it so they could know how sour it was. 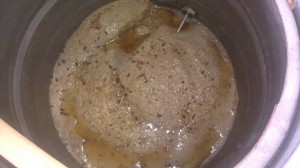 The boil went by quickly. That tends to happen when you have a good number of people around to distract you. Chilling is still being accomplished by a large immersible chiller.

After the chill was done, the batch was racked to two separate carboys. They were both filled with 4 gallons each of chilled wort.
One thing Mike remembered that Saison yeast do better with well aerated wort so he was sure to hit both carboys with a good amount of O2. Under-aerated wort is sometimes the reason why saison yeast doesn’t ferment all the way. Well aerated wort can prevent this issue from happening and also eliminate the need for high fermentation temperatures. 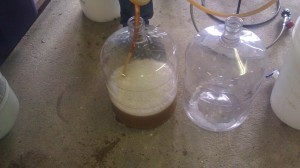 As I stated previously, both were inoculated with the dry Saison yeast but only one had a vial of Brett poured into it. The half of the batch should have noticeably different flavor and body characteristics from the yeast only one. We’ll be sure to do a side by side tasting.