Cider is something that I (try to) make every year. The making part happens in the fall and the bottling part happens when I get around to it, usually in the late winter of the next year. It gets a little confusing for me since I put the actual year in the post titles but I will get over it with some effort.

This cider which I made back in October has been patiently conditioning for weeks. I was waiting until the cider looked clear in the carboy but when the calendar turned to March, I decided that the clarity was as good as I was going to get and it was time to bottle.

Interestingly enough, when I took samples to check on the gravity, the cider appeared very clear in smaller amounts. You will see a photo of the final gravity a little further down in this post.

I mentioned getting equipment to best dry my bottles in an earlier post. Well, I got a couple of Fast Racks and I am pretty pleased with them so far. They are made of strong plastic and seem steady. With my 22 ounce bottles, they can handle 12 of them per rack. Since these racks are built to handle 24 twelve ounce bottles, I am pretty sure I can’t stack them. The bombers rest in alternating holes so there is no level surface on which the second rack can be placed. I’m ok with it – I may get a second drip tray but for you, it’s something to keep in mind if you are buying one and want to stack the racks for storage.

Here’s a photo of how I clumsily put some bombers in the tray for them to drain quickly after they were sanitized: 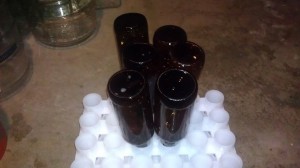 The bottling process went fine. I had nicely drained bottles and such. The two points of interest for you about this cider bottling were that I did add a little bit of table sugar to the batch along with some yeast to ensure I would have carbonated cider.

For the table sugar, I took a half cup right from the canister in my kitchen and boiled it in a pint of water for 15 minutes. At the same time, I proofed half a packet of Safale 05 in some 90 degree F water. These measurement were based on my prior experience. From my previous batches, this amount of sugar is suitable for a well carbonated cider. The yeast amount probably should have been measured but a half packet (~5 grams) of dry ale yeast can handle the added sugar, in my estimation.

The 05 yeast strain was chosen since I used an English ale strain for primary. I debated using a champagne yeast at bottling but I was afraid it would dry the cider out too much, especially when I saw the final gravity. 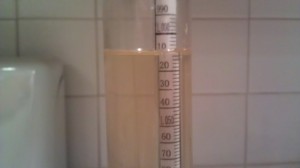 A 1.010 reading is where an ale yeast gets you after primary. I bet you a champagne yeast, if added, would knock you down below 1.000 while it was working away in the bottle! Fearing bottle bombs, I added sugar and ale yeast, thanking you very much.

As for tasting, there is a flavor element that I think came from the raisins that I added to the secondary. It wasn’t unpleasant but certainly…different.

This cider, without me really planning it to be, became the experiment for understanding what raisins bring to the party when added to cider.

When it is fully carbed up and chilled, Mike and I will have a tasting video and discuss.

What is Top Mashing?